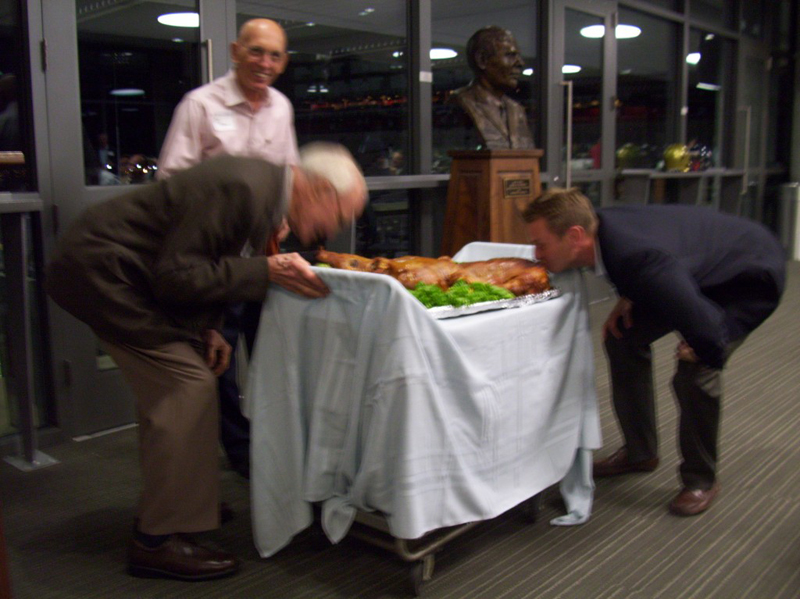 Friday night, November 7th, we again held the Annual Pig Dinner at the Sand’s Club in the Stadium North End zone. In attendance were over 130 graduate brothers, spouses, and guests. Brother Jeff Derickson ’72, former Chapter President, served as the emcee who introduced the special guests who were in attendance. This year, the initiates of 1964 celebrated their 50th year as brothers and were awarded their Gold Owl Awards and Pins.

The evening began with a special guest–the University of Arizona Director of Athletics, Greg Byrne who welcomed everyone on behalf of the University. After Greg’s welcoming words, guests were treated to a buffet dinner. Shortly thereafter, Brother Vince San Angelo ’62 gave a presentation highlighting the status of our chapter–Where we were, Where we are, and Where we will be.

Next, the 1964 Initiates were called forward to receive their Gold Owl Awards and Pins. Brother Derickson then took over and asked graduates in the following categories to stand for recognition–members of each decade, former Bobcats, Chain Gang, Blue Key, Sophos; former Field Secretaries, Purple Legionnaires, Section Chiefs; former Varsity Athletes, chapter Presidents and cabinet members, members of ASUA, class officers, cheerleaders; and, many more categories that brought delight and laughter to the attendees.

Brother Brent Moody then gave a brief history of the Major General John Renner Scholarship award. He then called forward Rachel Rivera who is the University coordinator of the scholarship, LTC Barnett, the Professor of Military Science, and the first scholarship recipient Cadet Kyle Degraw.

Following this portion of the evening, Brother Bill Polson gave a recap of the History of the Pig Dinner and presented his “tailored” Exile’s toast. Then, with the 1964 Initiates escorting the Pig, the entire audience sang “Marching in the Pig.” Once in place in front of the dais , Brother Schuyler Lininger, class of 1944 and Brother Steve Rawls, class of 2002 were called forward as the oldest and youngest graduate brothers to perform the ritual of kissing the pig as designated in tradition. The evening concluded with an invitation to everyone to attend Brother Tom Moore’s long-standing traditional reunion event at the Knights of Columbus later in the evening.